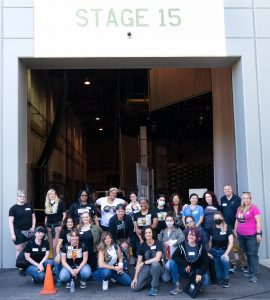 We are so excited to see our members, vendor partners, and friends at CineGear 2022! Join us in The WiMLounge in the West Hall, Booth 956 where you can meet filmmakers in a relaxed setting, enjoy panels, and learn more about Women In Media.  Our booth Ambassadors are excited to greet you, and all genders are welcome! WiMLounge panels are free and open to all CineGear attendees.  You may get your Altitude Awards Party wristband at the booth on Thursday any time before 5pm so that you can VIP your way into the party.

The evolution of drone technology has raised the potential for cinematic production quality, unleashing previously unattainable creativity. Drones add exciting, soaring footage that can bring emotional impact. More accessible than a helicopter, but still a complicated tool, our experts will give you insight for your next project. From prep to logistics to legal to on-set protocols and post: This panel will inform and inspire your use of drones.

Sarah Phillips is a cinematographer, drone pilot, and VFX artist. She was featured in American Cinematographer magazine for her work as a drone pilot. She won Best Cinematography awards for the 2019 feature IRL. Sara shot a VR 360 Documentary in Bangladesh for The Gates Foundation and has recently gotten into virtual production, and now creates virtual environments. Find out more about Sarah here: https://womennmedia.com/profile/sarah-phillips/

Lynzi Grant is a VFX Producer and Aerial Producer. Her projects include Ocean’s 8, Beasts of No Nation and The Grand Budapest Hotel. In 2021, she was nominated by the Visual Effects Society for Outstanding Supporting Visual Effects in a Photoreal Feature for Extraction. She has produced Aerial teams for Disney and Netflix, and is currently working on the remake of Hocus Pocus.

Jenna Hoffman found herself drawn to the technology behind visual storytelling.  She went on to work on films, commercials and TV as a Union 1st AC. She purchased her first drone in 2013, and immersed herself in technical specifications, aviation regulations, and specific applications of drones. As a Licensed drone pilot and cinematographer, Jenna often reads up on drone industry news and changing government guidelines, and looks forward to a future where unmanned aerial systems are embraced and used to make the world a better place.

Danna Kinsky is a cinematographer, camera and drone operator who travels the world to film emotional stories to move the heart and create new perspectives. With over 25 years behind the camera, Danna has created award-winning narrative films, documentaries, music videos and commercials. Danna is a contributor to American Cinematographer magazine and her recent work, Now You See Us, has gone to over 40 festivals and won the Special Jury Award at the Chelsea Film Festival amongst other honors. Find out more about Danna here: https://womennmedia.com/profile/danna-kinsky/

The Altitude awards celebrate Women In Media members working in the Camera and Lighting Departments. Applicants included cinematographers, camera operators, and gaffers.  Our esteemed judges looked at their reels, supplementary projects, and artist statements, ranking and commenting on their work. We will be announcing the 20 Semi-finalists, narrowed down to 10 Finalists, and narrowed down further to 4 Winners at a special awards ceremony, with a party to follow.

Panel: The Cinematographers of CAMERAderie 2021

Born out of a desire to give our members the tools to break into studio projects, the Women In Media CAMERAderie Initiative has been wildly successful. This innovative program includes education, networking, and mentorship over the course of 18 months, culminating in shooting four high production value short films.  Our 2021 slate is currently on the film festival circuit, winning awards and gaining laurels. Meet the cinematographers who contributed so much to the art, craft, and emotional pull of the 2021 CAMERAderie films.

Michelle Clementine  Cinematographer: Charlie and The Hunt – screened at Cannes 2021. Her career in film began with an internship at TriBeCa Film Festival in 2005. After graduating with a B.A. in film production at Brooklyn College, the Bronx native joined IATSE Local 600 Camera Guild in 2010. In 2018, Clementine was part of the first ever Cinematography Intensive for Women at American Film Institute and began shooting a slate of short form narrative films. With experience on Oscar winning feature films, documentaries, commercials and music videos, Michelle has a practical approach to filmmaking that enhances the creative flow. Find out more about Michelle here: https://womennmedia.com/profile/michelle-clementine/

Rachael Hastings  Cinematographer: Smashed – won “Best Comedy” at the Miami Indie Film Awards. She is a working cinematographer, gaffer, set lighting technician, and camera operator with 17 years of experience shooting all over the world. She has worked on award-winning narrative film, TV, documentary, and commercial projects for Women In Media, Gatorade, Adidas, Netflix, Showtime, Disney Plus, Speedo, Intel, Qualcomm, Chase Bank, United Airlines, OOFOS, Google, Deathwish Coffee, All BLK Network, DirecTV and as a jib operator or cam op on over 200 live events since 2004. She has worked on 12 LGBTQ or BIPOC film projects in the past two years. Find out more about Rachael here: https://womennmedia.com/profile/rachael-hastings/

Panel: Leveling Up In Local 600

Joining a Union takes experience, hard work, and perseverance.  This panel will demystify not just how you get in, but also how you build a sustainable career and move up in classification.  We will look also look at the current trends for people entering local 600 in the Camera department – the answers may surprise you!

Jessica Lopez, SOC: is an experienced IATSE Local 600 Camera Operator and Steadicam Operator working in Motion Picture Television, Films, and Commercials. Today Jessica is celebrating her contribution to Netflix’s The Lincoln Lawyer where she worked as B-Camera Operator/Steadicam Operator and currently she is finishing up Season 5 of Disney’s Grown-ish. Learn more a Jessica here: https://womennmedia.com/profile/jessica-lopez%2c-soc/

Panel: Beyond Continuity: The Cinematographer and Script Supervisor Connection

Script Supervisors are an important department head who works closely with the director and all department keys, often saving the day. Holding the entire movie in their head, they make sure that every needed setup gets shot and that continuity is intact. As the editor’s representative on set, it’s imperative to know how they can help you to ensure the final cut is of your best work, no matter what department you represent.

Diane Newman’s illustrious multi-decade career as a Script Supervisor includes credits in everything from B-Horror movies and animation to multi-award-winning films and TV shows, including the six-time Oscar nominated Good Night and Good Luck and the Coen brother’s star-studded Suburbicon – both which were lensed by Oscar-winning Cinematographer Robert Elswit. She also scripted Oscar nominated “The Ides of March,” which was shot by two-time Oscar nominee Phedon Papamichael. Equally accomplished in Television, she has worked on multiple multi-Emmy Award-Winning and groundbreaking TV shows such as WandaVision and Westworld, and The Comeback where she worked with Emmy-nominated Cinematographer Nancy Schreiber. Diane’s resume also includes working with Emmy and ASC winning DP Adam Arkapay on the multi-Emmy-award-winning show True Detective for which he won one of his Emmys, as well as such iconic and award-winning shows E.R., Scrubs, Friends,The Simpsons, and Pushing Daisies, to name just a few. One of George Clooney’s preferred Script Supervisors, she has scripted alongside the multi-talented Oscar-winner on five films and TV shows he directed.

Nancy Schreiber is an award-winning cinematographer who was the fourth woman ever voted into membership into the prestigious American Society of Cinematographers. She garnered an Emmy nomination for Best Cinematography on the acclaimed Celluloid Closet. In addition, Schreiber was nominated for an Independent Spirit Award for Chain of Desire.  Schreiber has lenses Sundance films The Nines, Stranger Inside, Motherhood, and Loverboy. Additional independent films include Serious Moonlight, Everyday, and Your Friends and Neighbors. Schreiber’s television work includes STATION 19, P-Valley, The Family, Better Things, The Comeback, and In Plain Sight. She is also known for the documentaries Linda Ronstadt: Sound of my Voice and Metallica: Some Kind of Monster. Schreiber also has had a long career filming music videos including Pink Floyd, Billy Joel and early rap artists including Kool Moe Dee. Find out more about Nancy here: https://womennmedia.com/team/nancy-schreiber/

Moderator: Caryn Ruby is an award-winning dark comedy writer, performer and professional script supervisor, Caryn has worked alongside Oscar and Emmy award-winning crew on both Women in Media CAMERAderie grand prize winning films “Charlie and the Hunt” (Cannes) and “Blood and Glory” (Tribeca). She had the privilege of script supervising the American Society of Cinematographer’s Standard Evaluation Manual (StEM2) film which was written and directed by Jay Holben, and was selected as one of 17 fellows for Blackmagic Collective’s Filmmaker Advancement Initiative. Her new podcast, “Script Supervisors: Unsung Heroes of Film and TV” is set to launch this August. Find out more about Caryn here: https://womennmedia.com/profile/caryn-ruby/

Meet us in at the #WiMLounge in West Hall for a scheduled tour of some of our favorite equipment vendors who have set aside time for us. Wear your Women In Media tee shirts and get ready for some special face time and presentations, while socializing with fellow WiM community members. All genders are welcome!

Meet at The #WiMLounge Booth 956

Over the course of the early pandemic, Women In Media collaborated with MBS Group SVP of Global Finance and Operations, Irene Phan to create #Illumination Training that enhanced our member’s skills in Grip, Electrics, and Carpentry/Scenic Art. Trainees got hands-on training at the MBS and Television City facilities, working side by side with highly skilled gaffers, grips, best boys, and rigging assistant chief lighting technicians, as well as carpenters and scenic artists leading to further opportunities.  Putting these skills into practice, we built and lit sets on soundstage for two of our CAMERAderie films – Smashed and Moon, as well as lit Charlie and The Hunt and Noor with MBS equipment on location.

This panel will discuss how the program is evolving, where the work is, and the solutions being implemented to fill the positions so needed in the film industry.

Irene Phan is the Senior Vice President of Global Finance and Operations at The MBS Group.  In her role, she has assisted with the expansion of The MBS Group’s international business, asset acquisitions and financial system transitions. Irene also led the development and deployment of the MBS Illumination Training program, to empower underserved communities to work in the film and television industry and develop skills in the areas such as lighting, grip and set construction. This program is a cornerstone of MBS’ focus on diversity and inclusion and lights the way on education, job placement and mentorship for participants. Learn more about Irene here: https://womennmedia.com/profile/irene-phan/

Amy Snell was a mentor and educator for our 2021 Illumination training and CAMERAderie films. She started her film career in Detroit as a grip in Film, Commercial, and TV(Reel Steel, Red Dawn, Oz The Great and Powerful). After 5 years as a member in IATSE Local 38, she moved to Albuquerque, NM where she joined IATSE Local 480. It was there she started taking more positions as a Key Grip, Best Boy, and Key Rigger on War on Everyone and Get Shorty. In 2016 she joined IATSE Local 80 where she has been a Key Grip on Timeless, Better Things, and For All Mankind. Learn more about Amy here: https://womennmedia.com/profile/amy-snell/

Please be advised that in-person events hosted by Women in Media may be recorded and distributed for promotional purposes. Your voluntary participation in such events authorizes and acknowledges Women in Media’s exclusive rights of ownership and use of all recordings and photographs.

Thanks to our vendor partners!

The Altitude Awards Are Presented By Zeiss and Frame.io