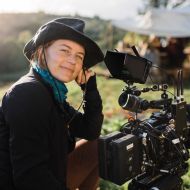 Sarah Phillips
Camera, VFX, Writer
Sarah Phillips is an award-winning DP/cinematographer in Los Angeles. She is also an FAA Drone Pilot, has an indie VFX house, Alpha Centauri VFX, and writes scifis and musicals.
This user account status is Approved

She appeared on the past two seasons of Amazon's Making The Cut television show, as a DP shooting fashion films for the contestants. She was featured in American Cinematographer magazine in August 2021 for her work as a drone pilot.

She won Best Cinematography at Idyllwild Film Festival, and then at Silicon Beach Film Festival, for the 2019 feature "IRL". She shot a VR 360 Documentary in Bangladesh for The Gates Foundation and The Chan-Zuckerberg Foundation, as the 360 DP and the Drone Pilot. She was a finalist in the Women In Media + Zeiss Altitude Awards in 2022.