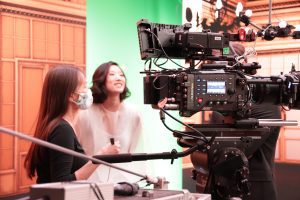 Visualize This! More women than ever are in the vanguard of VFX, virtual art department, and volumetric capture. There’s never been a better time for women to form the new frontiers in technology. If you aren’t using VFX and Volumetric Capture today, you will be using it in the near future. People from all departments are wanted to create the future of how we make movies, and you too can be part of the new wave of women making it happen.  This panel and networking event will demystify this exciting field and inspire you towards new career options.

There will be cocktails and nibbles.

There will also be a Zeiss CinCraft Mapper demonstration. Be the first to test this new VFX Workflow. Learn more here.

Space is limited and vaccine cards will be checked at the door.

Join us for a panel of women at the forefront of the technology:

Tara DeMarco is the Emmy Award nominated VFX Supervisor of Wanda Vision.  She began her career by studying Fine Art Photography and Interrelated Media at Massachusetts College of Art in Boston. It was there that she discovered a passion for visual effects, and the seamless blending of created images with the footage captured in camera. DeMarco is an award-winning VFX Supervisor known for her cutting-edge work as a Flame Artist.

Sarah McGrail has worked as a Visual Effects Producer on over 60 acclaimed television series such as Riverdale, Orange Is The New Black, House of Cards, Sense8, and Game of Thrones, as well as numerous feature films such as Alien. She is on the on the Visual Effects Society LA Board, an Executive member of Women in Film, and an active member of the Television Academy of Arts & Sciences, Hollywood Post Alliance, and the Producers Guild of America.

Connie is a member of the Northwestern University Entertainment Alliance, Women in Film, and ASC Virtual Production Committee and a Board of Advisors for the National Collegiate Performing Arts Association, former Chair of ACM SIGGRAPH – San Francisco Chapter, and Former Board of Director, Kellogg Alumni Association – Los Angeles and served as Executive Director of the Pre-Visualization Society. More about Connie here.

Kari Grubin has spent the past 20 years leading and managing studio divisions, global post-production facilities, corporate departments, and groups within trade organizations. She was the Vice President of Mastering for Studio Operations at The Walt Disney Studios, Vice President of Post and Restoration Services at Deluxe Media Services, and Sales Director for NSS Labs, a cyber security and research lab.

Kari is the Co-Chair of HPA ALL, the Hollywood Professional Association Diversity, Equity, and Inclusion Initiative.  In 2021, Kari was invited to become a Member at Large by the Academy of Motion Picture Arts and Sciences.  Kari currently serves as the Project Director of SMPTE’s Rapid Industry Solutions On Set Virtual Production Initiative.

Please be advised that in-person events hosted by Women in Media may be recorded and distributed for promotional purposes. Your voluntary participation in such events authorizes and acknowledges Women in Media’s exclusive rights of ownership and use of all recordings and photographs.

All are welcome. Women In Media members, log in to reveal your 50% off discount code.

Thanks to HPA and Zeiss for their partnership!