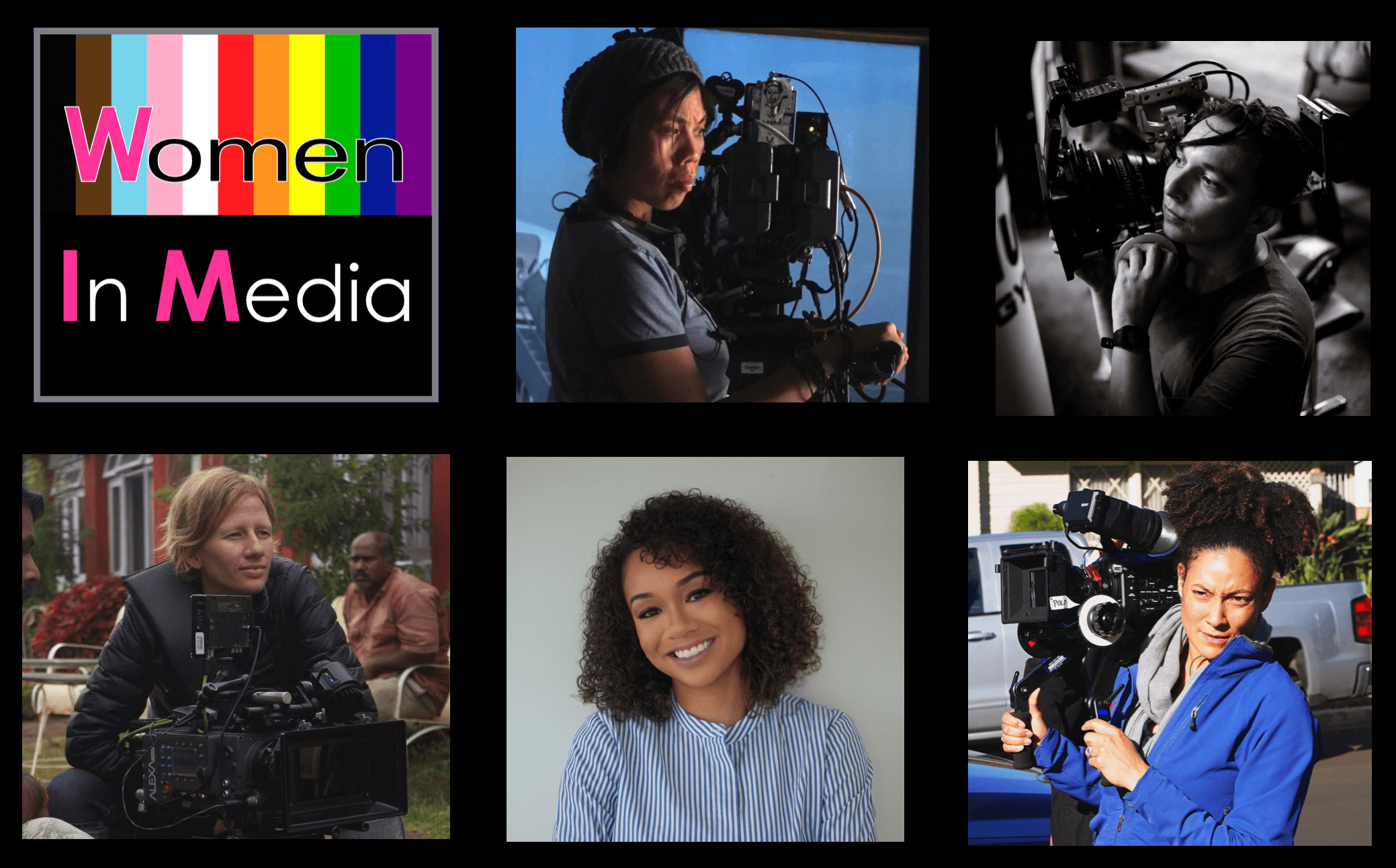 Women In Media brings you a very special #WiMPride Virtual Brunch! Join us in the spirit of inclusiveness and fairness in the film industry as we celebrate the intersectionality of LGBTQ+ and WOC, working together above and below the line. Our panel comprised of the powerhouse teams working on Insecure and The L Word: Generation Q, moderated by Women In Media Executive Director, Tema L. Staig. All genders were encouraged to attend.

Ava Berkofsky was born in Wales, raised in the mountains and cities of California, and is now a U.S. based Director of Photography. Her background in fine art and documentary photography inform her textural approach to cinematography, marked by an ever present (or relentless) search for the nuance of place, time, and subjectivity.

In 2019 Ava was nominated for an Emmy in Cinematography for her work on HBO’s Insecure, where she worked with Director/EP Melina Matsoukas to create and execute the look for the show.

Recent feature projects include Share (2019 dir. Pippa Bianco/produced by A24) which was nominated for the Caméra d’Or at Cannes, and won the U.S. Dramatic Special Jury Award at Sundance. Free in Deed (2017 dir. Jake Mahaffy) earned Ava a nomination for Best Cinematography at the Independent Spirit Awards, while also winning among other awards, the Orizzonti Award for Best Film at the Venice film festival. Other projects have premiered at festivals including Toronto, AFI, Rotterdam and SXSW, twice winning a Special Jury Prize (Share and Sequin Raze, dir Sarah Shapiro).

When not shooting, Ava can usually be found laying in the grass with her 5lb chihuahua Tiny.

Sherri Kauk‘s cinematography is fast and beautiful – shooting the Emmy-winning CBS series ‘The Inspectors’ in 2.5 shoot days per episode and the Netflix worldwide distributed feature, LOEV, in 16 days. She is at home internationally, with on-location work including India, Egypt, Mozambique, Mexico and across the United States. Her work is artistic and commercial, airing on Netflix, CBS, A&E, Lifetime; screening at SXSW, Frameline, Guadalajara, Tel Aviv International Film Festivals; She has a Master of Fine Arts from the American Film Institute. Articles about her work appear in the American Cinematographer Magazine, Variety, Huffington Post, LA Times, and the BBC. “I am drawn to everyday characters challenged to deeply understand themselves thru confrontation with self and society. This character journey becomes my cinematography.

Kira Kelly is a Director of Photography whose ability to shoot iconic images earned her a spot on American Cinematographer’s2017 Rising Stars of Cinematography, Variety’s Top Cinematographers to Watch list, and an Emmy nomination.

Kira received a 2017 Emmy Nomination for Outstanding Cinematography For A Nonfiction Program for her work on Netflix’s critically acclaimed documentary 13th, which was directed and produced by Ava DuVernay. The film, which investigates the relationship between the criminalization of African Americans and the US prison boom, earned a nomination for Best Documentary Feature at the 2017 Academy Awards and won the 2017 BAFTA for Documentary Feature and the 2016 Peabody Award for Documentary.

She recently collaborated with director Ava DuVernay for a second time, lensing the second season of the critically-acclaimed series, Queen Sugar, executive produced by Oprah Winfrey.

Kira began her career as a gaffer in NYC before making the leap to cinematographer on dozens of music videos. Her first feature began a long-lasting collaboration with director Tom Gustafson. The musical Were The World Mine (winner of 15 jury and 11 audience awards) gave us our first look at her narrative work, summed up perfectly in the Hollywood Reporter: “The lush cinematography belies the modest budget.” Kira also shot Gustafson’s second feature, Mariachi Gringo, in Guadalajara, Mexico. She wrapped production on her most recent narrative feature Skin in The Game, set for release in 2018.

In addition to her work on 13th, Kira’s passion for documentary work has taken her around the world to countries as far flung as Rwanda and Cuba, to global events like the World Cup Final in South Africa, and to meet childhood hero Olympic Champion Greg Louganis while shooting the documentary Back on Board: Greg Louganis, recently nominated for an Emmy for Best Sports Documentary.

Kira currently lives in Los Angeles and is represented by DDA.

Deniese Davis got her start in entertainment by producing indie low-budget projects including music videos, short films and digital content. In the web-series realm she is best known for producing Issa Rae’s award-winning web series, The Mis-Adventures of Awkward Black Girl. She is currently a Producer on the HBO comedy series Insecure and an Executive Producer on the upcoming HBO limited series The Dolls while continuing to produce and oversee content for Issa Rae Productions. She also serves as COO of ColorCreative, which provides access and opportunities for diverse and emerging writers and recently sold their first feature film Love in America to Universal. Originally from Las Vegas NV, Deniese is an alum of CUNY-Brooklyn College and the American Film Institute Conservatory.

Sandra Valde-Hansen was named as one of the 2014 “Generation Next” cinematographers in ICG magazine, She holds an MFA from the prestigious American Film Institute.  As well as lensing political and socially conscious documentaries for Al Jazeera America (Daisy and Max), PBS (Tales of Masked Men) and MTV (House of Style), Valde-Hansen has over fifteen independent feature credits, including Jewtopia, directed by Bryan Fogel, Love is All You Need, for director Kim Rocco-Shields and After Everythingdirected by Hannah Marks and Joey Power.

Collaborating with indie darling director Gregg Araki, Valde-Hansen lensed Kaboom, which was an official selection at the Cannes Film Festival and Sundance Film Festival. She then reteamed with Araki on the recently released White Bird in a Blizzard, starring Shailene Woodley and Eva Green that also premiered at Sundance this year.

Valde-Hansen worked her way up through the camera department, and was mentored by luminaries such as Steve Poster ASC, Stephen Lighthill ASC, and Nancy Schreiber ASC.  Born in Miami, Florida, to a medical family of first generation Filipino immigrants, she received a BFA in film from Florida State University. She resides in Los Angeles and when she is not shooting, teaches in the cinematography department at AFI.

Women In Media Pride is a two-part celebration of our LGBTQ+ members and friends and their supporters in the entertainment industry. The #WiMPride Rally and the Virtual Brunch are open to members and non-members alike. We encourage everyone who supports inclusiveness and fairness in the film industry to join us.

This event will be recorded