Women in Media hosted a virtual conversation with attorney Justine Jacob (Seeing Allred) and Documentary Filmmaker Sarah Moshman (Losing Sight of Shore). The Doc Talk: Legal Ease virtual event discussed the legal protections you can put in place early in your production to save you both money and heartache down the road. We also dispelled myths about what is needed (or not) as you embark on your documentary projects.  All genders were welcome.

Justine Jacob is a founding partner at Focus Media Law Group. She specializes in representing documentary filmmakers in all aspects of their productions.  Whether shorts, features, or series, Justine has been a valuable asset from development through distribution, rights clearances, and fair use reviews. She has been an attorney for twenty years and during this time directed and produced two feature length documentary films: Runners High and Ready, Set, Bag!  You can find a partial list of projects she’s provided counsel for on her IMDb page. 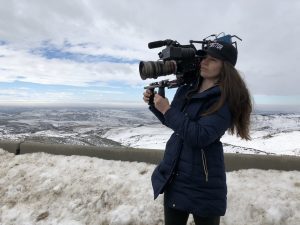 Sarah Moshman is an Emmy Award-winning documentary filmmaker and TEDx speaker whose work has been featured on Netflix, PBS, Upworthy, Marie Claire, CNN, and Good Morning America. Sarah has directed and produced 3 feature-length documentaries: The Empowerment Project  (2014), Losing Sight of Shore (2017) and Nevertheless (2020). She is dedicated to telling stories that uplift, inform and inspire as well as showcase strong female role models.

Prior to focusing on documentaries, Sarah worked as a field producer on the hit ABC show Dancing with the Stars for 10 seasons as well as shows on NBC, MTV, Lifetime, Bravo and the Food Network. She also directs branded content for EllenTube, Tastemade, Mattel, AT&T and more. Sarah is an inspiring public speaker and an adjunct professor in documentary film.  She is passionate about empowering the next generation of storytellers.

Women in Media (WiM) conducted a live drawing for a Director’s Chair, courtesy of our friends at Filmcraft!