In preparation of the launch of the new Women In Media website, we ran The #WiMCrewPix contest. We are always on the hunt for images of women working on-set to feature on our Twitter feed as part of our on going #HireTheseWomen campaign. We needed something special that we could feature on our newly launched Crew List. We had many excellent submissions, but for us, the clear winner was Emma Huibregtse. She submitted a few fabulous photos, but the picture depicting her on-set as DP was just right!

She has an incredible eye that reminded us of Jean-Pierre Jeunet’s film, Amelie. You may see her gorgeous film, “Head Space” at the Valley Film Festival on Friday, October 27th at 8 pm as part of their Girls on Film Friday. Get tickets here. Women In Media VIP Members get a special offer: first 20 tickets are free, after that, our VIP members get a 50% discount. Log in to reveal the code on this post.

Emma works in the camera department, directs, and works as boom operator and production sound mixer. You can check out her Women In Media profile here.

She graciously took the time to answer some of our questions:

I’ve always had an interest in multiple arts. I play trumpet, love to dance and have interests in costume/makeup design (Halloween is my favorite holiday!) I could never choose just one art form. Film incorporates all of the arts: camera, movement, music and art design, lighting…

What drove you to go into sound/camera work?

In a lesson on camera angles, our high school film teacher once asked the class to go into the hallway and place the camera on the floor. Since then the power of film to see differently than eye height has been a huge motivator in my exploration of unique perspectives and composition. While my main focus is cinematography, I am trained in both production sound recording and post sound mixing. It doesn’t matter how amazing your cinematography is if the sound is not good!

As a trumpet player, music and sound design has consistently played an important role in all of my films. Sound is never something to be tacked on in post, but rather a vital component of pre production and great inspiration in my cinematographic choices. How might a visual complement a sound bridge? Or what sequence of edited shots might highlight the rhythmic score? As a director I encourage sound and camera to work together as the collaboration between these departments can have an effect greater than the sum of their parts.

Tell us about your win at TriBeCa. 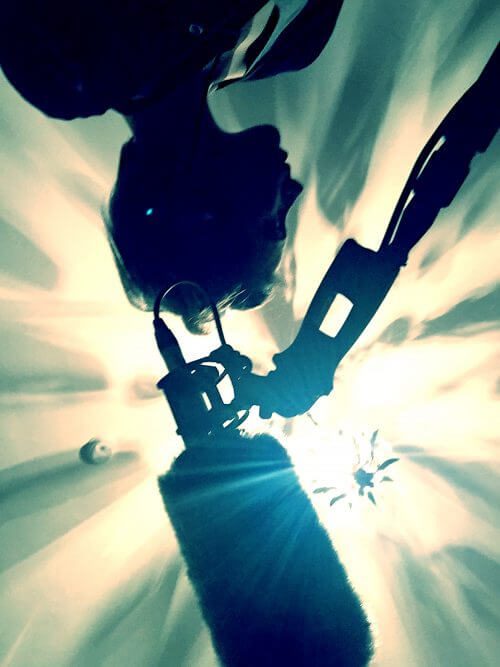 Back in high school I created a dance short filmed entirely in split screen which won the “Best Experimental Film” Award in TriBeCa Film Festival’s “Our City, My Story” program. Le Vol de Solange follows an urban ballerina as she ventures into the NYC metropolis to the hip hop beat of a jazz infused orchestral track.

Shot entirely on my iPhone, the film juxtaposes traditional ballet within the contemporary cityscape. Shooting on my phone also allowed me to film the split screen effect in camera rather than applying it in post. It’s amazing how beautiful even the gum stained subway floors can become when viewed as symmetrical patterns!

I usually start from a place of visual inspiration. I love creating look books, getting lost on Pinterest, and doodling massive storyboard webs. I’m constantly observing. Once, when asked to film a short in cinemascope I carried a cinefoil cutout rectangle in 2.35 aspect ratio and viewed the world in that framing perspective. Even observing the people around me, in the supermarket or on the subway, can lead to great character development! Once committed to an idea, I direct complete energetic focus towards pre production. Everything in the frame matters and I love to over prepare so I can be more present in dealing with the inevitable and unpredictable obstacles of life on set.

As a creative cinematographer, I’ve always been inspired by Hitchcock films and his use of unique cinematic compositions, camera movement and wild shot choices. I love bold cinematography choices (like Kubrick’s one point perspective shots) and am not afraid of a deep depth of field ~ especially if there’s story telling happening on multiple planes! I enjoy the bold saturated groovy designs of Peter Max and the graphic elements of the Art Deco period.

Lately I’ve been intrigued by the potential for a new way of storytelling in episodic TV shows. I binged watched Breaking Bad, taking screenshots of all the interesting camera angles. As a funk trumpet player, I enjoyed the organic blend of music, editing and visuals in Baz Luhrmann’s “The Get Down.” Combining multiple creative elements (lighting, camera, sound, art/costume design, etc) into a seamless dance has always fascinated me ~ Any of The Cirque du Soleil shows are also great examples of this!

It’s not about the gear! I always work with what I’ve got and believe true creativity often comes from having limitations. Just recently I was on a corporate shoot for Barnes and Noble and transformed a book cart into a dolly.

Most people don’t believe me when I tell them the majority of my reel was shot on my phone. In general I like working with lighter weight small cameras that I can get into interesting places! I love the GoPro, a durable camera which can be attached to almost anything and even go underwater! I also have a set of Olloclip iPhone lenses which provide more range to my phone filming. I avoid expensive cameras that get so hot they need a noisy fan to cool them down! ~ Ok, you have a lovely image, but your sound sucks! I love wide angle and long lenses (my current favorites are 14mm and 135mm) ~ basically any lens that sees differently than the human eye.

In terms of editing software, I’ve used it all: Final Cut, AVID, Premiere. In my experience they all do the same things, just in different ways. While my perfectionist attitude makes me a pretty good editor, I often lose my mind in post production editing labs, so for now prefer not to have a “favorite” editing software. I’d rather be on set creating a smorgasbord of visually exciting imagery for my editor.

Can you tell us something unusual about yourself?

I am a master at applying false eyelashes and in my dreams I sport an afro.

I am currently in pre-production for a Virtual Reality dance film ~ Stay tuned!