Shoshana Sachi is a New Zealand ex-pat who knows her cross media story telling. She writes for multiple television animation shows including Ben10 with Man of Action/ Cartoon Network, as well as game developer Pocket Gems on their gaming app Episode and HypeBits LLC on their gaming app Cliffhanger. She’s in early development on Black Dog, a horror feature film that combines her New Zealand and Los Angeles connections. Furthermore, she’s sprucing up a pilot and applying for CAPE fellowships– and her manager is currently looking for a buyer for a true-crime based horror feature. The world is hungry for content on all platforms, and Shoshana is in the forefront of this new wave of storytelling.

Born in Malaysia, Shoshana grew up in Hamilton, New Zealand’s largest inland city.  Her ambitions led her to cross 6,500 miles from the Southern Hemisphere to Hollywood to pursue her education. Her trek and hard work paid off when she graduated from the UCLA master’s program in screenwriting with an impressive 4.00 GPA.

Shoshana has participated in many writing contests, and won a fair few, among them the David Koepp Screenwriting award, Eleanor Perry Screenwriting Award for Women in Film, and a Screenwriting Seed Grant from the New Zealand Writers’ Guild.

We caught up with Shoshana to talk about the usefulness of writing contests and to gain insight about working in Hollywood from a Kiwi’s perspective.

You’ve participated in and won many contests – what has been the biggest benefit to participating in contests to your career?

The David Koepp Screenwriting award, and his glowing recommendations on a feature film of mine helped me get management representation. The winning screenplay also ended up getting funding via the New Zealand Writers Guild Grant, and is now in early development.

Would you recommend other writers to participate in them as well? A screenshot from Shoshana’s interactive story, Bully on Cliffhanger

Yes, and no. Some competitions are better than others, and it’s always best to weigh up the pros and cons of applying. There are so many screenplay competitions out there and a lot of them are only great for bragging rights because catching the eye of representation, a studio, etc is still hit-or-miss whether you win or not.

It’s often a bit of a gamble considering how expensive competitions are. I’d suggest applying for the big competitions – the ones with huge clout in the industry… and saving your money when it comes to the rest.

Do you have any tips regarding contests?

The best advice I can give in regards to writing screenplays in general, is to write genuinely and honestly. Don’t write to keep up with trends or what’s popular/successful right now. Don’t emulate someone else’s style, genre, whatever. Write pieces that are intrinsically you, and tells a story about who you are/ what interests you.

Readers can always immediately tell when a piece of writing is genuine or not, and there’s nothing worse than a dishonest script. You can be more forgiving of grammatical errors or spelling errors when a story feels truthful and effortless.

What has your experience in Hollywood been like, how does it compare to New Zealand? Why did you choose to make the giant move to the US? What would you recommend to other writers?

The move to the US for me is vital for my career as a screenwriter. New Zealand’s film industry is growing, but has a long way to go before it has the kinds of opportunities that Hollywood does. Writers are still second-class citizens in the film industry in New Zealand that favors auteurs: people who are directors/ writers/ actors/ producers. People who can do it all.

I prefer to specialize in screenwriting and I’m extremely interested in collaboration, so working in NZ can be a little hit or miss for me. Not to say I’m not interested in making films in NZ- of course I am, and with how successful NZ stories are doing globally, I feel like there’s a lot of opportunity to make things that are cross-national, and therefore globally powerful/ impactful. But there are restrictions.

There’s a smaller funding pool, and you need to be lucky enough to meet people who will be open to collaborating with you as a screenwriter. Not enough NZ filmmakers are open to collaboration. I’ve however been lucky enough to link up with people like Hamish Mortland (producer), who has been helping me push forward with early development for a feature film (Black Dog), that we hope to begin working on in 2018. It’s something that I’m working hard on being a cross-national film, involving talent from US and New Zealand.

I enjoy the small town, honest narratives that come out of NZ. Hunt for the Wilderpeople is a story you will never see anywhere else, and yet, it attracts viewers from all over. It’s enchanting, magical, and yet grounded – there’s a special science that makes NZ stories so great. My recommendation to other writers in NZ would be to expand, and find ways to improve, educate yourselves etc. It’s so important to be driven to write and develop stories that aren’t just successful at a national level, but internationally. The world is a big place, so why restrict yourself? A screenshot of one of Shoshana’s interactive stories on Cliffhanger

You also write for game developers; how is writing for games different than for film and TV? Can you tell us a little about that?

Honestly, it’s not that different. The rules are the same, you need great characters, high stakes, and engaging dialogue, situations, and emotional ebbs and flows. The main difference, of course, is the interactive component – which everyone probably wishes they had in TV and Film anyway. It’s essentially a stage 2 from TV and Film, if you want to look at it that way. It’s the fun choose-your-own adventure way of viewing a piece of media, where you get to play pretend and truly immerse yourself in the story.

Otherwise, the rules about narrative and structure are essentially the same. I think as we progress further, we’ll see film, television, and gaming becoming more and more synonymous. With games like Last of Us or Evil Within becoming highly cinematic, and narrative driven… to films and television shows adopting cross-platform marketing with game releases (especially mobile app games), and web based “special features”.

This stuff excites me because audience involvement is becoming a bigger part of the way in which television shows especially develop. Fan bases have a bigger say these days on the rise or fall of a series or film. Audiences are always demanding more, and so when a television show comes out with an app game version (for example, I work with Ludia who have multiple television show IPs in their app game ‘What’s your story’), people flood to download it and play their way through a narrative they love.

With the rise of VR technology, the line between “show” and “game” is blurring more and more.

Tell us about Cliffhanger.  It’s a really interesting concept for story telling.

I absolutely love my work on Cliffhanger. It’s been doing really well, boasting about 500,000 downloads to date, and is rated #9 on the Google Play store.

Cliffhanger is an interactive story gaming app where you read a story through text messages on screen. It’s like looking in on multiple characters conversing through text which gives you a real sense of immersion – like you’re part of the story too. It has this nostalgic ‘campfire’ story feel to it. If you were one of the 90s kids who grew up with Goosebumps, this will feel like a real throwback.

The great thing I love about Cliffhanger is that the possibilities for stories are endless, obviously it does best with horror stories – which are my passion, but it also is a great platform for comedy, romance, and drama. My stories Bully (a story that centers around cyberbullying and depression), and Midnight Delivery (a supernatural thriller) are two of the more popular stories on the app. I’m excited to keep working on the app, and hopefully we’ll continue to add more and more visual elements to it as time progresses.

What is your dream project to work on?

I have several dream projects I would like to work on. My passion will always be with horror, and I would love to make my own horror feature films with an international appeal. Other than that, I’m passionate about horror/ sci-fi television shows like Netflix’s Stranger Things that is inherently nostalgic to someone like me who grew up reading Stephen King. I’d love to write on a show like Stranger Things, or The Magicians (another incredibly smart show).

And on the gaming side of things, I’d like to develop that big narrative driven action/adventure horror. I grew up playing Resident Evil, Silent Hill, Alone in the Dark… and I’m inspired by games like Last of Us and Heavy Rain. To be able to develop something like that, something that millions of people could interact with, immerse in, and experience their own way would  be ultimately fascinating to me.

Dream games I would love to work on would be the Evil Within franchise, and anything by Telltale whose storytelling mechanics are second-to-none.

You can find Shoshana’s interactive stories on Cliffhanger for iOS, Android and Facebook! 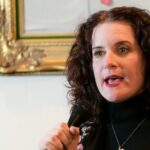