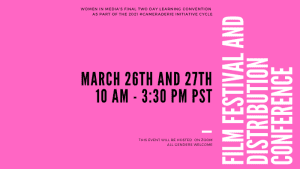 Join us for the spectacular finale of Women In Media’s “Script to Screen” CAMERAderie Inititiative Conference Series.  This two-day virtual conference will feature industry leaders and pull back the curtain on the final leg of the filmmaker’s journey – Getting your film out there!  Panel discussions, in-depth presentations, and candid question & answer sessions with the people who understand the changing landscape of festivals and distribution will inspire, demystify and help build winning strategies to get your film to audiences clamoring for your content.

There will be a drawing on each day for a customizable director’s chair from Filmcraft!  There is no cost for this drawing, but you do need a ticket and must be present to win.  They cannot have won a director’s chair previously from a WiM event or initiative.

All genders are welcome to join us at this event, and it is open to the public.  Women In Media Pro, Executive, and Supporting members should log in to reveal their discount code.

Get tickets for both days, as they are sold separately. Ticket sales close two hours before the event.

Always inspiring, pragmatic, and fierce, filmmaker & film festival professional, Kimberley Browning, will illuminate the world of film festivals. As Head of Programming, Catalyst Content Festival (formerly ITVFest) and Associate Short Film Programmer for Tribeca Film Festival, as well as Festival Director of Hollywood Shorts Film Festival, Kimberley knows the game, inside out. She’ll open your eyes and mind to a successful festival strategy whether you’re a rookie or a seasoned veteran.

This panel discussion will focus on the global market for shorts, features, and everything in between.  Our experts will give you insight into screening and distributing your project internationally – with a strategy to monetize them (or not).  Our speakers will illuminate different ways of thinking about screening and selling your films at festivals, VOD, and nontraditional venues such as educational and beyond.

Kimberley Browning returns to lead a special panel with top festival programmers. Topics include finding the right audience, why a Festival rejection letter is not a rejection of your film, the relationship between programmers, the audience, and the filmmakers, how much should you invest in marketing while you’re screening, and more.  Bring your questions – we will be submitting as many as possible, time allowing.

An ounce of pre-thought can prevent a pound of headache.  This panel of industry rockstars will “get into the weeds” on the details that smart filmmakers want to know before they start filming. There’s an entire package of materials that are just as important as your DCP; Technical Specs, Music Cue sheets (especially if it’s original) Talent releases, archival footage clearances, and more.  Our panel of experts will give you the nuts and bolts intel about the technical specs of what you will get into festivals and to sell your project.https://www.revry.tv/

Jennifer Smith – Music Supervisor, Why Women Kill, Behind The Music, Dancing With The Stars

Jackie Clary – Clearance Supervisor Behind the Music, Archival Producer: ’Twas The Fight Before Christmas, Reelin’ In The Years Productions

Kerry Michelle O’Brien – Conform and Deliverables at Different By Design

Ramo law’s Tiffany Boyle and Sean Pope will discuss the pros, the cons, and the pitfalls that stand between your film and your return on investment.  There is a lot to consider before making your deal such as the material terms and provisions you want before entering into agreements with agents or distributors. It’s absolutely critical that you walk into any distribution agreement with both eyes open and an understanding of what you want.  This conversation will lay out constructive tools so that you’re protected, not being taken advantage of, and that you get the deal that you deserve.

Knowing what a network, streamer, or distributor is looking for can be cryptic, and you’re not a mind reader.  This event is designed to take the mystery out of what they want and clarify what an attractive package looks like from their perspective. We’ll be discussing programming strategies, deal-making, and successful relationships to get your project on the right platform.

Kristen Bedno -VP of Distribution and Marketing for Vision Films