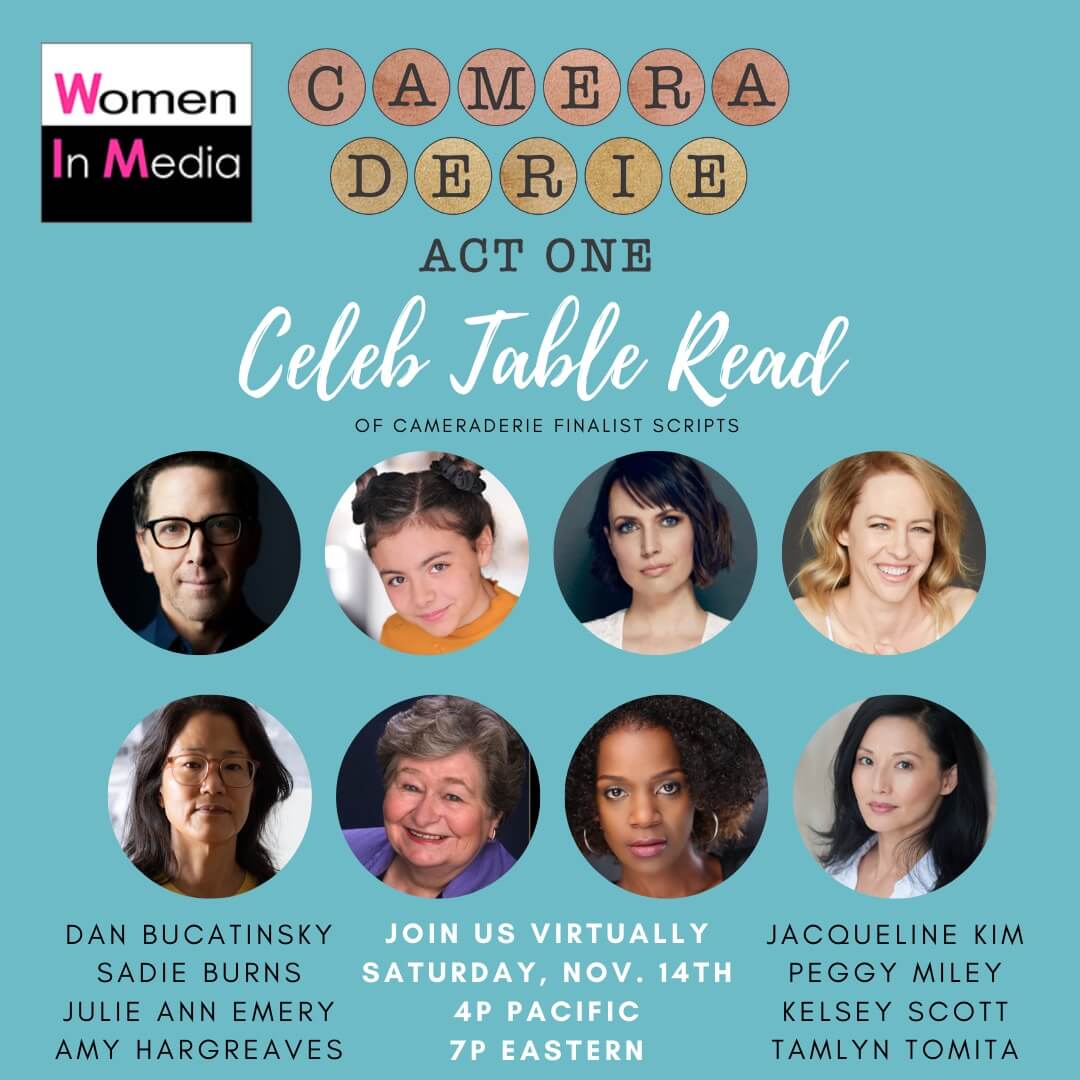 Our CAMERAderie: Act One writers have worked diligently to deliver beautifully crafted and unique stories. We are especially proud of the work that has come about due to the workshops and mentorship that are integral to this initiative. We cannot wait to hear their ten minute short scripts read out loud at our Virtual CAMERAderie: Act One Celeb Table Read.

The six Finalist Scripts will be read by established actors who are graciously supporting this initiative’s mission. Our goal is to lift these writers up, propel them on their journey to tell their stories, and foster successful careers. Find out more about CAMERAderie here: https://womennmedia.com/cameraderie-initiative/

Kelsey Scott How to Get Away with Murder, Insecure, 12 Years a Slave

Ziyao Liu is a Chinese writer/director/editor who creates films of a personal nature to generate empathy and understanding in people who are otherwise very different in both Chinese and American society.

Daisy is Gone – An anthrophobic Chinese poet tries to return a cloned fish, which he believes to be a botched imposter of his lost pet and best friend.

Erin Neumeyer is an actress, writer, director and social activist best known for the digital series Your Neighbors the Neumeyers and the short film Everything Has Carbs who is an active member of several female empowerment groups including Women in Media.

I’m a Hero – One woman’s heroic fantasy of gun ownership is so strong that it pulls her anti-gun sister into her hyper-realistic imagination where they fight for their beliefs and their lives in this genre shifting action comedy.

Toy Lei is a multi-award-winning writer/director, actor, and fight choreographer who also Instagrams her dog, Wilfred, between pandemic Zoom meetings.

Moon – Two friends remember their childhood tree fort pacts and discuss their current lives, while having a lovely lunch on the moon.

Nagham Osman is an Egyptian writer/director, born and raised in Dubai who moved to New York to fulfill her dream to study at NYU’s Tisch School of the Arts graduate film program. Her work draws on personal and family bonds and the sacrifices they make.

Never Talk to Strangers – A child makes a matter of life and death choice but doesn’t know it.

Sarah Leibman is a writer/director whose short films have been shown at prestigious festivals throughout the U.S (including New Orleans Film Festival and Cinequest Film & Creativity Festival) and who has developed screenplays for Andrew Lauren Productions.

Stale Air – When a reclusive older woman’s husband dies, she begins having strange visions that make her believe she is dead too.

Krista Amigone is a writer-director-actress best known for her film The Dancer, chosen by Apple for its first Short Film Challenge, and for her short film Julian Got the Part.

The Instinct – A pregnant waitress takes her co-worker’s bullying in stride. But when the harassment turns physical, the waitress’s Mama-Bear instincts take over and she defends her and her child’s life to a grizzly end.

CAMERAderie: Act One Finalists will receive a comp code to attend for FREE. Women In Media members, log in to the website to reveal your discount.  There are limited comp and pay what you can tickets.

Ticketed attendees will receive the Zoom link via email 24 hours prior to the event and again an hour before to the event.