In honor of International Women’s Day we’re excited to present this candid Q&A with Cinematographer, Carolina Silva de Costa! Selected as one of American Cinematographer’s Rising Stars of 2018, Carolina is an award-winning Brazilian cinematographer that has traveled the world photographing critically-acclaimed feature films, documentaries, shorts and commercials. Costa most recently shot director Minhal Baig and executive producer Jada Pinkett Smith’s coming-of-age story HALA, which premiered at Sundance before being picked up by Apple. It’s been a stellar and active start to 2019 for Carolina, and we were so glad she had the chance to share her story with the #WiM community here:

What sparked your desire for filmmaking?

I started in journalism and from an early age I loved writing and reading. So my connection with cinema, at first, was through words. I slowly moved into photojournalism. When I was 14, I assisted a photographer and those many hours in the dark room made me fall in love with images. Once I got to university in Rio de Janeiro to study journalism, my teachers allowed me to produce work that was mixed media – essentially it was a lot of poetry and still photography. 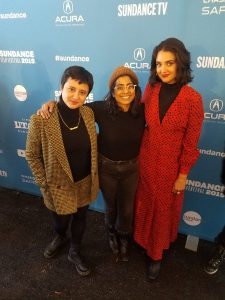 When the job of actual photojournalism came through, I realized that it wasn’t my passion and decided I wanted to move somewhere else and start from scratch. London always seemed like a place where one could become whoever they wanted to be – so I moved there. After less than two months in London, I got my first gig as a camera assistant on a short and it all became clear. I fell in love with the film set and there wasn’t any turning back for me. From then on it was about learning – I became a camera trainee, then a clapper/loader, and eventually became a director of photography.

I can also trace my drive towards filmmaking back to my childhood – I borrowed my dad’s VHS camera and did many music videos and soap operas. My friends and family were my actors and I would write the concepts and shoot it.

Another changing decisive moment was when I watched the Macedonian film, BEFORE THE RAIN, I was 11 when I saw it with my mom. It blew my mind. I couldn’t stop thinking about it. It was the first time I understood the power of cinema, where a film could go and where it could touch and open other doors.

Who has influenced you the most?

I think my parents influenced me the most, and they probably still do. I come from a family of psychiatrists and from an early age I was into that. That’s what usually pulls me towards a project – the psychology behind the characters and their actions. Sometimes I call my dad up and ask him, “Why would someone go that way if “X” happened to them in the past?” 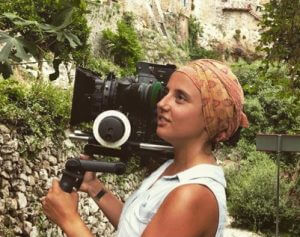 My mom started her career super Freudian and then moved into the arts – she had an art gallery for many years in Brazil. A lot of my intellectual formation and my taste comes from the many nights I spent in crazy gallery openings and art fairs. My mother has once more reinvented herself and started a new career two years ago. You can’t get a bigger idol than that.

As for filmmakers, I would say the work and ethics of cinematographers Sven Nykvist and Gabriel Figueroa influenced me the most. Also the films of Tarkovsky and Kieslowski – their films will never stop opening doors to me.

It was a watershed moment for women at Sundance this year, and you had two big features. Minhal Baig’s HALA specifically got a lot of attention in which you were the Cinematographer & DP. Can you tell us about your experience working on this film and the overall importance of what it meant for you? Minhal’s work has always been impressive to me. I think we had been keeping tabs on each other’s works over the years. I had seen her short with the same name and loved it. So when she contacted me to possibly shoot the feature version I was flattered.

I choose every project I shoot and I’m lucky to be able to do that. I choose projects with themes and stories that I care about, and because of the directors. I want to work with people that have a voice and have something to say. I invest a lot in each project and that is also a reason to choose them carefully.

HALA was the first time I read a coming of age story through that lens – a Muslim girl raised in America. I felt it was important to support a filmmaker that wanted to shine light on this story told from a unique perspective. The overall experience was very positive – I have fond memories of this shoot. Minhal made sure that not only were we bringing that narrative forward in front of camera, but also behind the camera. All department heads were women and 75% of the crew was women and people of color. It created a very supportive environment. That was so important especially when you have a shoot of 18 days on a feature.

Minhal and I collaborated closely on pre-production. We knew we had to be on the same page every day that was coming up for the shoot. I felt that my job was to make the set ups and the time I spent on set… be precise, smart and fast. I wanted to make sure that Minhal and the actors had the majority of the time. In the end that is what matters in the film. We had to find the heart of it. Sundance was intense but a great experience. It was incredible to watch HALA with a crowd for the first time and great to have the whole team reunited again. The best part is meeting folks that connected with the film. That is priceless.

Tell us about your work on festival favorite, CRYSTAL SWAN?

CRYSTAL SWAN premiered last year at Karlovy Vary and has since travelled to many festivals, including Slamdance this year. It has screened in theatres all over Europe and won a few awards in Eastern Europe too.

The director, Darya Zhuk, and I started chatting over the internet and eventually I read the script and fell in love with it. I connected with that story and felt I could contribute to this film. The shoot took place in Minsk, Belarus and I had never been there before until I landed to start on pre-production. It was important to Darya that our film had color, that it wouldn’t be another depressing and grey post-war movie in that side of the world. I feel I soaked up a lot of her loving eyes toward that city. I remember going scouting and being shocked at how beautiful and exciting it was to shoot in certain places. The crew would be baffled sometimes…

It was just an extremely rewarding experience on every level. Every time I get the chance to be at a screening, young women always come up to me to say ‘Thank you’ ‘I hadn’t seen myself on screen before.’

What is your artistic & developmental process when preparing for a film?

I am in search of stories and themes that matter to me or narratives I haven’t seen on screen before. Then I have to find my own connection to it. It can be a scene, a situation, something that makes me go ‘Aha, I get why they did that’ or ‘I have been there before.’ Sometimes it’s the characters or the relationship between characters. In HALA for example I connected with the mother and daughter relationship – I saw a lot of myself and my mom in it, even though I was raised in Brazil and in a Catholic environment.

It has to come from the story being told, I need to connect with that. Equally important is the director behind it. When I first meet a director I always try to see if I can read and interpret them well, I need to know if in the middle of a crisis I could instinctively know what they are after. I need to know from the start if I can be there for them. That takes me to something that I follow all the time – my instincts. They guide me in choosing projects, making choices, developing a relationship with a director, and so on. When I am prepping for a project, it starts with my instincts. When I am reading a script, I get many ideas from my gut, and it develops as we go along.

The first thing I do when I start on a film is a psychological breakdown of the script with the director. What is it that we are after in every scene? What does it mean? From there we start pulling references – they can be from anything: other films, photography, paintings, sculptures etc. From that, I build mood boards for each character and location. A lot of my work comes from the time I spend on locations. Sometimes this comes as a handicap, because people ask, ‘How do you see this scene?’ and depending on where it takes place I have to be in that place before I can answer that.

Once we establish the overall look and feel of the film I tend to stop watching other films and seeing art in general. I don’t want to be influenced anymore, I want to live the story we are telling.

One thing I do is prepare PDFs that I call cine bibles and those are distributed to all departments the day before the shoot. They are good guides of what we will be doing the next day. They have the shot list, camera floor plans, visual references etc.

What does it mean for you to be part of the Women In Media community? I feel community is very important. Sharing and feeling inspired by others seems to me to be the only way to move forward. With Women in Media we can help get that representation. I hope to inspire a young Latina woman… who feels she can do this, and that sometimes… it’s going to be hard on your own. WiM can give that visibility.

I don’t really have a preferred technique – but I can say that I always light with my meter and a good waveform monitor. I can always trust a light meter. As far as cameras, I have only shot on the Alexa Mini for the past few years, so I feel I know that format quite well and can rely on it.

What advice would you give to someone who is just starting out? Many people have told me that I would never make it. I used that to help me push forward instead of becoming bitter. What others declared as impossible, I embraced, and made it fire my ambition, spurring on my success. I think you have to trust yourself and your instincts. Keep pushing forward, don’t stop!