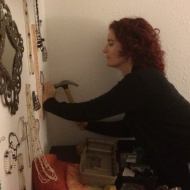 Ms. Staig has been in the film industry since graduating from the Tisch Department of Design for Stage and Screen in 1999. She is a Production Designer/Art Director with a background in Scenic Art and Theater Design. She was a pilot IFP Project Involve: NY Fellow. She is producing three short films in 2019 and in development on features. She is also the Executive Director of Women In Media.