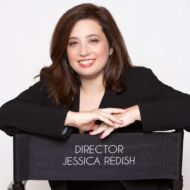 Jessica Redish is an accomplished director, writer, actress and award-winning choreographer. She recently choreographed The Smashing Pumpkins' International Tour which played Madison Square Garden, The Forum and appeared on "Jimmy Kimmel Live." She recently directed for Elizabeth Banks' WhoHAHA Platform and is the recipient of the Helen Hayes Award for Outstanding Choreography for her work on Silence! The Musical at Studio Theatre. In addition to being nominated for multiple choreography awards, her first full-length play ROCKSTAR was a 2018 Humanitas PLAY LA Finalist.

Inspired by the work of Twyla Tharp, Pina Bausch, Bob Fosse, as well as Tony Winner David Cromer and Tony Nominee Michael Greif, both of whom she has had the honor to work with Off-Broadway, Jessica strives for detail, honesty, compulsion and her work has been described as "a masterpiece of coordination and choreography" by Julie McHale (Timeout Theatre Critic).