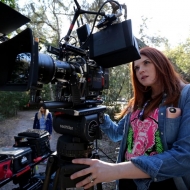 Coming from a family of artists, Beth's passion for creating moving imagery stemmed from an early age. A love of photography and cinema coalesced into a career in filmmaking. She studied studio art with a concentration in photography at Saint Mary's College in Indiana. Shortly after she earned her MFA with a concentration in cinematography from Florida State University. Since starting her career, her work has screened at festivals domestically and internationally, including Poland’s Camerimage and the American Pavilion’s Emerging Filmmakers Showcase at Cannes. Some of her commercial clients include Vizio, Sharp, Nestlé and RED Digital Cinema. She lensed the commercial short film, Carrion, which unveiled the first footage from RED's 4.5K Raven camera. Her recent projects include the upcoming feature Death Cast, directed by Bobby Marinelli and the short film, Échappé, directed by Allison Mattox. Beth will always call Indiana "home", but she is currently based in Los Angeles.