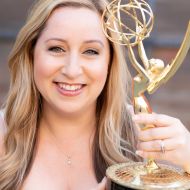 Allison is an Emmy Award-winner for Outstanding Digital Drama Series for "After Forever" in 2019 and currently holds three Emmy Nominations for series "After Forever" & "Dark/Web" in the 2020 competition and for "Vanity" in 2016. She currently serves as the Producer for Barbie & Dolls at Mattel, producing short form digital scripted content.

Allison Vanore is an Emmy Award-winning producer of the acclaimed series "After Forever." Between 2015-2019 Allison served as the Head of Production for Canvas Media Studios where she produced "Wear It to Win It" for Facebook, "Vanity" which garnered her first Emmy nomination, the pilot "Socio", and the popular Yarn series "Limelight."

She's is published in the book "Thriving in Hollywood!: Tenacious Tales & Tactics from Ms. In The Biz." She also serves on the executive board of Women in Media.

From 2004-2008, Allison was the Director of Creative Operations for boutique interactive design house Georgopoulos Design serving agency and studio clients.