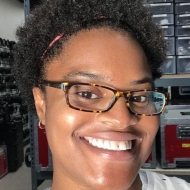 Born and raised in Baltimore, Maryland. Served 7 and a half years in the United States Navy and 2 years in the Air Force Reserves. Current film production student in the M.F.A program at California State University, Los Angeles.