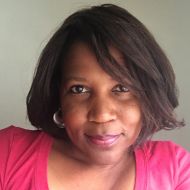 Stacey Marbrey
Direction, Production
Stacey Marbrey is an an award-winning filmmaker and a creative catalyst with a penchant for visual storytelling.
This user account status is Approved