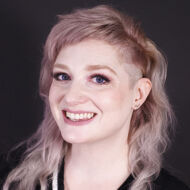 Sophia began her career in music as the no-wave punk singer-songwriter-drummer in Do Not Forsake Me Oh My Darling, known for music-video recreations of the ‘60s spy TV series, The Prisoner. Sophia combines her love of music and film as head interview cinematographer for the Women of Rock Oral History Project, documenting the lives and careers of women who have been underrepresented or omitted from rock journalism and historical scholarship. Sophia was a 2017 artist-in-residence at Museumsquartier (Vienna), where she built an interactive musical cocktail robot installation.