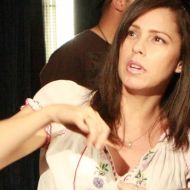 Shawna Baca
Direction, Production, Writer
An award winning filmmaker born and bred in East Los Angeles and raised by her Indigenous (Yaqui/Apache) grandmother, who taught her cultural ways and practices. She is a 3rd Gen Chicana American.
This user account status is Approved

Shawna Baca is an award winning writer and director. Her first screenplay, Impersonal Impression, about a rape victim and her unusual hero, won the 2002 Slamdance Anarchy Competition. Shawna was selected by Steven Spielberg and Mark Burnett from more than 20,000 filmmakers to be part of his 2007 FOX reality show, ON THE LOT . She is the only Indigenous and Chicana filmmaker that made it to the top 30.
In 2008, Shawna received a “Mujeres Destacadas” award by La Opinion newspaper and the City of Los Angeles. She is currently in post production on a feature documentary she is producing “Laserium: Masters of Light,” and in development on an indie feature film she wrote and is slated to direct, “R Loves J.”