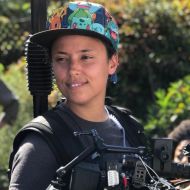 Sara is a cinematographer based in LA who’s been working in the camera department for a decade. She has lensed over fifty short films, as well as features, commercials, music videos and episodic. Her work has screened at festivals around the world and can be seen on Amazon Prime and HBO Max. The show Dark/Web, which she shot the first episode of, won a Daytime Emmy for lighting. She is currently in production on the feature documentary Black Barbie by director Lagueria Davis. Sara loves her work and is known as a positive force on set. She owns and operates a RED Dragon camera package.