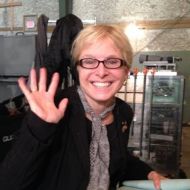 Mary Lou Belli
Direction
I direct TV (150+ eps) and write books (working on #4) and I make short films for fun!
This user account status is Approved

2 Emmys, a CINDY and lots of theatre awards.

Mary Lou is a 2-time Emmy award-winning MARY LOU BELLI has been directing television for over 20 years including NCIS New Orleans, Pitch, Monk, Famous In Love, Devious Maids, The Quad, and Hart of Dixie as well as Wizards of Waverly Place, Sister, Sister, Girlfriends, and The Game. Her short film, Straight Eye for the Gay Guy won “Best Mini-short” at the California Independent Film Fest where she also premiered her latest short I Heard Something, a thriller that went on to play other fests internationally.
Mary Lou is the Co-chair of the Women’s Steering Committee at the DGA. She is the co-author of three books: “The NEW Sitcom Career Book,” "Acting for Young Actors," and “Directors Tell the Story” which she co-wrote with fellow DGA member Bethany Rooney.