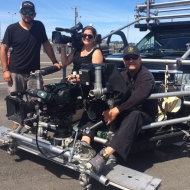 Society of Camera Operators
Academy of Television Arts and Sciences

Mande Whitaker, SOC grew up all over the US as the daughter of an Air Force rescue pilot. She first began learning about motion picture in Alaska when her jr high school received a grant that allowed her to transition from stills to super 8 and video. She eventually became a freelance camera operator in 1998 which allowed her to travel to the world. Those cultural experiences combined with the people she met along the way helped form her view of the world and the stories she tells. Over the years she has operated on a variety of projects from competition series like Wipeout and Fear Factor to scripted comedies such as It’s Always Sunny in Philadelphia and Those Who Can't. Most recently Mande operated alongside an all female crew on the new Netflix Documentary series "Jailbirds". She currently splits her time between Los Angeles and Seattle.