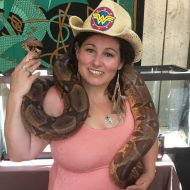 LuvLeighAn Clark
Direction, Production, Writer
I was raised in foster care. I have lived in 9 states, driven in all but 7 states, including Canada twice. All of this helps me as a Writing & Director. I have also worked in veracious jobs on set.
This user account status is Approved

Books
"Poems and Photos"
"My Story Told Through Red Glasses"

Los Angeles
Atlanta
Ohio
Michigan
Any, and have passport

LuvLeighAn was raised in foster care and at the age of 20 she walked to California from Michigan in the hopes of being a famous actor. She has since realized behind the camera is where she is the happiest. She has great skills at braking down scripts and putting together the schedule for filming.

LuvLeighAn has worked on shorts, independent features and TV shows as PA up to an AD on others projects, while writing and directing her own projects. She also has completed film school. However, do to the change in technology she has lost almost all of her projects or have no way to transfer to the internet. So, she is planning on filming five shorts by the end of the year, to build her reel as writer and director.
She is looking for other chances to build her directors reel. while also, looking to join a writers room.