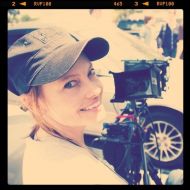 Lisa Stacilauskas, SOC
Camera
Lisa is a DP and Camera Operator who's sense of empathy empowers her as a storyteller and collaborator. She's shot indie features and award winning shorts, and has operated on numerous TV shows.
This user account status is Approved

Lisa is a Cinematographer and Camera Operator; always on the look out for interesting stories to tell. She's DPed several indie features including Thursday’s Speaker, nominated for Best Cinematography at the Columbia Gorge Film Festival and numerous award winning shorts. As a Local 600 operator, she’s been fortunate to work on several successful and unique TV shows.
While Lisa’s sense of empathy empowers her as a storyteller and collaborator, it also informs her belief in a friendly, safe work environment, where every cast and crew member is treated with respect.
Lisa holds an MFA in cinematography from Art Center College of Design, was a 2010 Fellow with Film Independent's Project:Involve and serves on the board of governors for the Society of Camera Operators.