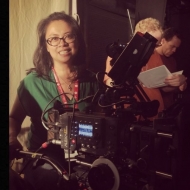 Leah Anova is a Los Angeles-based Director of Photography, who received her Masters of Fine Arts in Cinematography from The American Film Institute Conservatory. Since graduating, Leah has lent her expertise in lighting, composition and camera work to a wide variety of productions, ranging from narrative films to corporate videos.