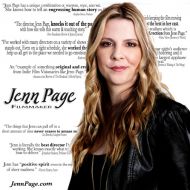 Jenn Page
Direction, Production
Jenn is a director with over 10 years experience under her belt including music videos, live stage shows, digital series, and feature films. She specializes in directing romantic dramedy and musicals.
This user account status is Approved

Jenn Page is an accomplished feature and series director who was selected by Take The Lead as one of the “50 Women who Can Change The World in Media & Entertainment.” She’s filmed projects for/with internationally known brands and artists including Blackmagic Design, Panic at the Disco, Weezer, Billy Ray Cyrus, Wolfmother, Estee Lauder, and Hans Zimmer. Her work includes the award-winning comedy musical feature film “Waiting in the Wings” starring Lee Meriwether and Shirley Jones, the award-winning musical comedy series “My Two Black Girlfriends,” the award-winning dramatic rock opera “The Breakout,” and the International Academy of Web Television’s live awards show hosted by Tony award winner Roger Bart. Most recently, she completed “Playing with Beethoven,” a feature film starring Kadeem Hardison and Shannon Elizabeth.