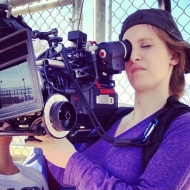 Emma Kragen
Camera
Emma Kragen is a Los Angeles- based cinematographer who completed her MFA in Cinematography at the UCLA School of Theater, Film, and Television. She is also the co-owner of Zemma Productions.
This user account status is Approved

Where She Lies, Feature Documentary
Cinematographer

Emma Kragen is a Los Angeles- based cinematographer and co-founder of Zemma Productions. She works regularly in the commercial, documentary, narrative, and corporate spaces.
One of her proudest achievements was traveling to Antarctica with environmentalist Sir Robert Swan and his organization 2041. While at UCLA, she was also featured in Variety’s 110 Students to Watch.
She completed her MFA in Cinematography at the UCLA School of Theater, Film, and Television, and holds a BA in American Studies from UC Berkeley.