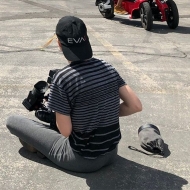 Elle Schneider
Camera, Direction, Production
ELLE SCHNEIDER is a filmmaker from New York City with over a decade of experience and dozens of credits behind the camera as a director and cinematographer.
This user account status is Approved

ELLE SCHNEIDER is a filmmaker from New York City with over a decade of experience behind the camera as a director and cinematographer. Her work has been featured in Vanity Fair, The Hollywood Reporter, Paste, Wired, and MovieMaker. She most recently shot and directed 2nd Unit for History series The Food that Built America, premiering May 2019, and a short for Atomos and Sigma.

As a director, Elle specializes in short narrative, documentary, and branded work. She has directed music videos for Gangstagrass and Speedy Ortiz, whose David Lynch-themed MY DEAD GIRL premiered in Vanity Fair and VILLAIN on Billboard.