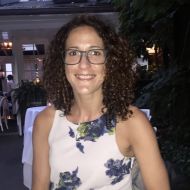 Elizabeth Cirillo
Post Production
I am an Assistant Editor (MPEG Local 700) and documentary film director based in Los Angeles.
This user account status is Approved

Above And Beyond: NASA's Journey To Tomorrow (2018)
Assistant Editor

Elizabeth Cirillo is a passionate, hardworking documentary director and film editor. She holds a dual B.A. from New York University, where she studied Journalism and Political Science. She received her M.F.A in Film & Television Production at USC. In 2015, she won USC's First Film Faculty Award for "Outstanding Achievement in Editing." That same year, she directed her first short documentary film, HOMEGIRLS, which was shortlisted for the US Student BAFTA Awards and earned her a nomination for Best Woman Filmmaker at the DGA Student Awards. The film has since screened at over twenty festivals and has won several awards.

For the past three years, Elizabeth has edited several feature films and was recently accepted into the Motion Pictures Editors Guild. Over the past year, she has worked as an Assistant Editor on Home Before Dark, a new Apple series, and iZombie, a CW series. She is currently editing out of Los Angeles while developing her feature documentary.