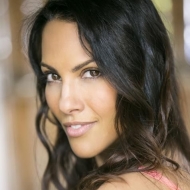 Born and raised in New York, Christianna Carmine spent much of her early life as a stage actor who harbored a strong interest in the human condition. As she began to amass a body of stage credits, her fascination with human nature continued to grow, influencing her work as a performer and lead her to study psychology at the graduate level.
After completing her Masters’ Degree in Psychology, Christianna continued to pursue a career as an actor. Eventually, her attention became drawn towards the art of filmmaking and in 2011, she produced and directed her first short, Darryl, shot on 16mm.
Since then, Christianna has directed several more projects, winning multiple awards at film festivals around the country. She is currently in post production on her eighth film Enough Room, a short about racism and tolerance.
Christianna is passionate about human rights and environmental issues, serving on the Board of Alliance of Women Directors and making people laugh.