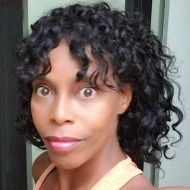 Cheryl Lewis is a unique, multi-discipline performer on the stage and screen, member of SAG-AFTRA/AEA/AGVA/AGMA. She is a stunt performer, martial artist, fight choreographer, action designer, actor, dancer, circus aerialist and puppeteer. Cheryl background is in varsity sports (volleyball, softball, cheerleading & gymnastic). She transitioned into becoming a professional dancer and circus aerialist, performing all over the USA, in Thailand, Dubai and Osaka, Japan. Cheryl is a martial artist with training in Tae Kwon Do, Kung Fu and Kendo. All of her training and skill sets made the transition into stunts a natural one. Cheryl is experienced in car hits, high falls, wire work, fire burns, fights, weapons (martial arts & tactical). Cheryl is a member of the United Stuntwomen's Association. You can email her for more specific stunt footage