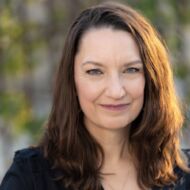 Annika Hylmö, Ph.D. has a doctorate in Communication, or Storytelling, as she puts it, from Purdue University. She studied female-driven tales in academia, where her research into movies starring teenage girls led her passion for visual media to her own screenwriting and story consulting.

Born in Sweden and raised internationally, Annika credits Pippi Longstocking as an early role model. While she is largely genre agnostic, she has a soft spot for mythologies, supernatural and science fiction movies.

Annika recently co-produced Academy Award-nominated Daniel Raim's documentary, IMAGE MAKERS for Turner Classic Movies, about early cinematography and the story of the people behind the camera. Her short film PSYCHICOLOGIST about a psychology graduate student who finds an unexpected mentor in a psychic puppet is in post-production.

Annika is also Women in Media's Director of Development. She previously worked at the American Film Institute’s Conservatory and currently works as a career/creative coach for individual filmmakers.