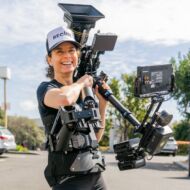 Aline Ballestero
Camera
In the camera crew. Since the beginning, year 2000. I started on TVs, always camera op, then freelancer life began in 2004. Steadicam op in 2012. Plus little yoga and bike fun, life is good!
This user account status is Approved

Started as television Camera Operator in Brazil in 2000. Steadicam operator from 2012. Moved to LA in 2015 and worked at Becine rental house until Aug/19. Back to full time Steadicam op from Sept on. Cheers!