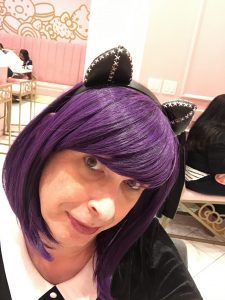 Post Producer/Supervisor Kerry Michelle O’Brien started in the late 80’s on 16mm, progressing to a stint making Video Disks for immersive interactive projects. She became an early adopter of Quicktime tech, propelling herself as a Lightworks expert. Kerry Michelle later became a director of live music TV, then sold her soul to commercials and gameshows. She then became a product specialist at Adobe, helping launch Creative Suite in Europe and then touring the launch of CS3 in major cities across the USA.

Kerry Michelle worked as a production and pipeline/workflow expert for major studios, including Disney and Sony. She made a career choice to build out her editorial chops as an Assistant Editor on feature films and documentaries. Most recently Kerry Michelle has been the executive producer on the film “Lupe”, edited in Premiere Pro. Traveling with the film, see her on the festival circuit where she gives good “panel”.

Often referred to as a “seller of snake oil and the fixer of broken dreams” Kerry Michelle is happy to do items “off menu” if hard cash is involved. Kerry Michelle has a long and checkered past in post over the last 35 years, obviously she started cutting when she was two.

Please tell us about your role in the CAMERAderie Initiative: 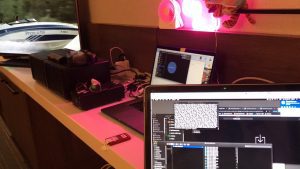 Initially I wished to be around the film makers and assist anyway I could, sharing my knowledge. I had no plan. I just wanted to volunteer anyway I could as Kerry Michelle isn’t that known a quantity only being 2 ½ years young.

Thankfully, I was asked to talk about the “from set to post pipeline” with another more established VFX artist at Orientation Day. That went on to me doing DIT, AE and Post Supervision on Blood and Glory. It wasn’t my game plan, but so happy to share my knowledge.

I would have been more involved in the shoots for the other two projects, but I was looking after my son most days and family always comes first. When he and his mom left suddenly to emigrate to Germany I needed to fill the void and threw myself into CAMERAderie.  By the end I was doing Post Supervision on all three projects and ensuring all deliverables to Universal were working. We waisted little time on the lot. I missed the screening, as I was editing for Neil Young at the time. 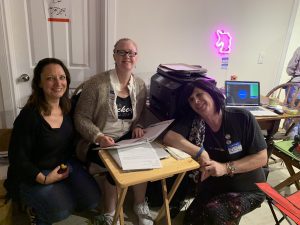 I love to find out who I’ll be working with when on set. Doing DIT I often get to sit with the “grown ups” but love to mingle with the crew whenever possible. Being really good friends with sound and camera departments, plus buying the sparks a drink/burrito helps, as one is often the last on set laying off cards and you need that electric and light!

When doing Assistant Editing work, I like to have an idea of the project, treatment as I’ll get scripty notes daily.

As a post supervisor, I like to be involved during shooting. It’s necessary so that one has an idea of VFX or sound issues ahead of rough cut and prep teams accordingly.

Peter Greenaway, as he’s a fabulous director juxtaposing lush visuals will Michael Nyman scores. “The Cook The Thief” and “The Draftman’s Contract” had such an impact on my own visual style.

Stephen Poliakoff with his nebulous story telling that meanders around a multifaceted narrative that often exposes the hidden stories and meanings within our media. His TV and narrative features are such a joy for me.

Danny Boyle because he brought me coffee while I was cutting a storyboard for “28 Days Later”. You gotta love that.

Tell us about “Lupe”.

For the last 12 months, I have been fortunate to be touring the festival circuit with the feature film “Lupe”. I am now credited as Executive Producer after initially being asked to give editorial notes. I can go on about how fabulous this movie is!  Visit the website and the FB page to see the film’s impact.

The festivals I’ve been to have asked me back to judge in late 2020/2021 as while there I am really about sharing with the other film makers. I got mistaken as a staff member at one festival as I was offering to mentor other film makers.

I suck at sports and academia. That’s mot good when you have two brilliant siblings going to Oxford. Hiding in our school’s dedicated theatre for 7 years, I got to work with the National Theatre and ballet groups. I was bitten by the “let’s put on a show” bug and never looked back.

At the age of 12, I walked up to an “Antiques Roadshow” OB van where they recorded the show and asked to have a look round. The crew was taken aback by my audacity. Consequently, I spent a whole day being shown the ropes.

Also, growing up in Leavesden (home of Harry Potter) I had access to Pinewood, Shepperton, Boreham Wood and Elstree studios. It’s where Star Wars, India Jones, James Bond and other blockbusters were shot. If I felt wily enough, I’d wander on to set to see the teams at play.

I love the use of practical models and effects when possible. Having grown up in the theatre, it was that portfolio of work that got me into school. I used to shoot 16mm whenever possible. I asked my cinematographers to light and color right on set. Post used to be so expensive.

Having been at the “bleeding edge” of media production and distribution technology since 1989, I have a love/hate relationship with software. When presenting new tech or launching products I only ever spoke about what worked and how you could tame it, so I can’t really recommend one piece of software. I am more agnostic and “use the best tool for the job not the coolest”. Just because it’s new, it’s not always better.

I am still a member of a miner’s welfare club in the North of England and trade unionist in the UK.

I told Paul Stanley of the rock band Kiss to “get the F@#$ out of my way”. I hadn’t had my coffee and it was past 10:30am. Justified I feel, as beware a woman scorned. Event more, “never deny a tired t-gal her coffee, as you will be stabbed!”.

I work on any projects that I feel have a heart and interesting story/concept that help push inclusion and diversity below and above the line.

Right now I’m Post Super on a schlock horror about vampire babies and a short about a psychic puppet. I’m narrating a children’s short story and doing stand up. I’m in development of a stylized silent narrative feature with a goth music god. It’s hard to work in doors wearing dark sunglasses but we manage.  I’m avoiding direct sunlight. I’ve been promoting a documentary called “Polak” that calls out the rise of the extreme right in Poland that started 10 years ago. I’m always promoting my current feature film “Lupe”.

I’d love to be back in the position where I could provide completion funding to shorts and features. In a previous life, when I lived in Soho London, I did this a lot. Always looking to mentor and collaborate when possible.