It’s not everyday that we get a deep look into the world of ‘production design’ in Hollywood, so today’s #FemaleFilmmakerFriday feature is with, Chloe Arbiture. Chloe is an Emmy-nominated Production Designer who has designed sets, graphics, speciality props and more for productions like Miss 2059, Thrill Ride and Drunk History to name a few. Her unique and artistic on-set perspective has led her to projects across ABC/Disney, Google, Comedy Central and Vanity Fair. Find out more about her journey below:

You’ve been nominated for an Emmy and were listed Variety’s Artisans Elite “Up Next” series in 2018. How has 2019 kicked off for you? I opened 2019 in Chicago, IL finishing up season 4 of NBC’s Chicago Med. It was my first 1 hr/procedural show, and we wrapped it up in April. It was a really different experience for me than any other show I’ve designed, and I’m really proud of the work my art department did!

Tell us about your work on Drunk History.

Drunk History was a really fun job to design. Every single shoot day meant a new time period, and a new drunken story to tell. It was impossible to get bored because as the seasons progressed, the stories got bigger and better and we were able to expand the types of ways we told the stories. I loved working on that show; I got to create so many miniatures and do matte paintings and use painted backdrops. For a production designer it was a literal playground. Derek and Jeremy (the creators of the show) were excited about new ideas and very supportive of trying new things.

How did you get into production design?

Originally when I moved to Los Angeles after college I thought I wanted to go into costume design. On my first job as a costume assistant, I saw what the art department was doing. I had a fine arts background and even though I love to sew, I saw the creative problem solving and the ingenuity from the art department. After that project I dove in headfirst into the art department and I’ve never looked back!

Reflect on one of your most challenging experiences in the industry, and tell us about how you overcame that:

I received an Emmy nomination for Drunk History in 2017. I had a huge sense of accomplishment; even though we didn’t win, everyone told me that it was the nomination that really counted. I was excited because multiple agencies were interested in possibly signing me, and I thought that finding work and getting my next project would become significantly easier with the nomination behind me. After the Emmys, I ended up having the longest period of unemployment I’ve ever had. Agencies who were interested in me before Emmy night didn’t return my calls after we lost. I felt terrible honestly, and I felt like maybe my best work was behind me.

A few months later, the agency I was most interested in called me and said they wanted to sign me. I ended up booking Chicago Med shortly after that, the biggest job I’d ever booked. It was a humbling learning experience for me…it taught me to be patient, and that the long game is what really matters. Nominations, awards, buzz, that all goes away the next day. By having such a long term of unemployment I was able to rework my portfolio, hone my drawing skills with classes, and really take stock of where I was in my creative journey and process. Being off between gigs will always be stressful, but sharpening your metaphorical tools in your time off really helps with the insecurity that you’ll never work again. I try to remember that when I am between gigs now, that the buzz around your name is valuable for the help in the long game, and to not get too focused on it otherwise. Focus on your work and your craft and the jobs will come.

What are your preferred software tools?  Do you use white models, or computer models?

I do all my design work digitally. I love conventional drawing tools, but I find that I’m simply much faster digitally. I do all my 3D modeling in SketchUp and modify images in Photoshop and Illustrator. If I need to sketch something, I use Adobe Sketch or ProCreate on my iPad Pro. I like digital mediums because I can edit and make changes much quicker. I find that 3D models are great for directors and DPs because you can really conceptualize faster– something that’s absolutely dire with fast-paced production schedules. 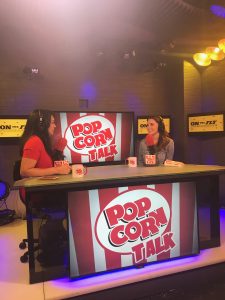 If you weren’t a production designer what would you be?

I’ve always loved digging in the dirt! Someday I tell myself I’m going to open my own greenhouse.

What are your upcoming projects?

As of writing this, I’ve just found out that I booked Season 9 of American Horror Story on FX! I have always been a huge fan of the production design on that show and so it’s very exciting to be a part of this upcoming season.